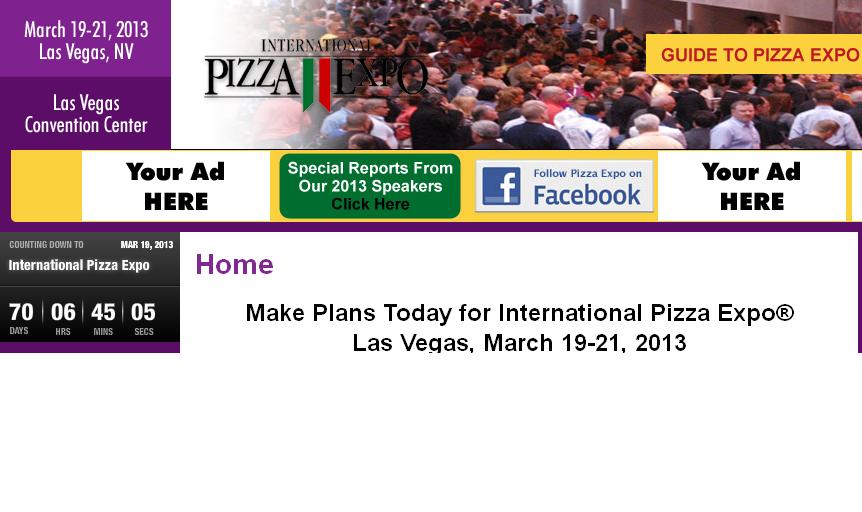 The largest and longest-running trade show serving the pizza industry is now in its 29th year and still growing.

At Pizza Expo 2012 this past March, more than 6,900 pizzeria owners and operators representing millions of dollars in buying power visited 425 exhibits seeking new products and services.

Here are some other business-building and networking opportunities being planned for the 2013 show:

Scheduled for Monday, March 18, this focused day of education geared to Pizza Expo newcomers has become a must-do for operators who are new to the business or to the show. With nearly 700 pre-registrants this year and even more expected in 2013, there will be high energy for a day of seminars, workshops and networking sessions.

Now a Pizza Expo tradition, these roundtable networking sessions will return as a way to relax in the late afternoon after a full day on the show floor and in the seminar rooms. With refreshments in hand, pizza operators bring their problems and solutions to the table—and moderator and Pizza Today publisher Pete Lachapelle solicits ideas on some of the biggest issues from the entire group.

A Wednesday evening capper featuring the acrobatic dough spinning finals of the Games, this entertaining stage show brings the crowd to its feet in appreciation of the athletic juggling prowess of the competitors, who perform their highly choreographed routines to music. Food, drink and other entertainment round out the festivities.

Thursday is bake or break day in the final rounds of this pizza making competition, which is divided into four divisions: Traditional, Non-Traditional, American-Pan and Italian-Style. The four division winners will square off in a final using ingredients from a common table and one mystery ingredient that all must incorporate on-the-spot into their pie to present before the judges. The champion is crowned Pizza Maker of the Year.

Event Staff for Trade Show, Conventions, Corporate parties and other events.
Trade Show Models
Promo Staff & Hostesses for your Trade Show Booth
Pool Cabana Girls
Cabana Girls for your next pool party or event!
Play a round of golf with some of the most fun and beautiful women of Vegas.
Hire a spokesmodel for a convention
Trade show models for hire
Let our brand ambassadors promote your products
Attract clients to your event or booth
Hire a booth model for your event
Let our models promote your products
Hire professional trade show models